October 02, 2019
Press Releases
HALF MOON BAY, CALIFORNIA (October 2, 2019) –– Bring it on beefy, brawny, burly behemoths! Will the heavyweight pumpkin world record go down in Half Moon Bay this year? No weigh? Weigh! The excitement is building in Pumpkintown as the World’s Greatest Gourd Growers and their humongous, mind-blowing, Volkswagen-sized orange orbs hope to crush the world record on the morning of Monday, October 14 at the 46th Annual Safeway World Championship Pumpkin Weigh-Off –– in the World Pumpkin Capital of Half Moon Bay, California –– the kick-off to Half Moon Bay’s world-famous Art & Pumpkin Festival which takes place October 19-20.
Weigh-off organizers and title sponsor Safeway are offering a world’s biggest top prize of $7 per pound. Also at stake are thousands of dollars in beefed up prize money doled out to the top 20 plus the big carrot: a $30,000 total mega-prize for a new world record pumpkin entered at Half Moon Bay –– considered the “Super Bowl of Weigh-Offs”.

A host of accomplished veteran growers will be contending for the coveted title. The winner and champion mega-pumpkin also play a starring role in the world-famous Half Moon Bay Art & Pumpkin Festival, Oct. 19-20 (including a free weekend at the posh, pumpkin-centric Ritz-Carlton on the stunningly beautiful Half Moon Bay coast).

Defending Half Moon Bay champion Steve Daletas’ gorgeous and gargantuan 2,170-pound weigh-off champion mega-gourd obliterated a formidable field of heavyweight contenders in winning the 2018 Safeway World Championship Pumpkin Weigh-Off.
Beauty will share center stage with beefy brawn — a special $1,000 prize will be awarded to the “most beautiful pumpkin” as judged by the audience based on color, shape and size.

It’s always a sight to behold. Every year on weigh-off reckoning day the streets around downtown Half Moon Bay are lined with sagging, overloaded trucks crammed with burly orange behemoths quietly awaiting their place of destiny in the worldwide media spotlight or the Libby's canning factory, their massive roots firmly planted in buckets of water to prevent weight loss as fans ooh and aah at their sheer, stunning enormity.

Using forklifts and harnesses, the monster gourds will be carefully placed on a 5-ton capacity digital scale under the watchful eye of officials from the San Mateo County Agricultural Commissioner's Office of Weights, Sealers, and Measures. 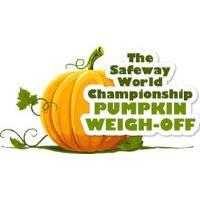